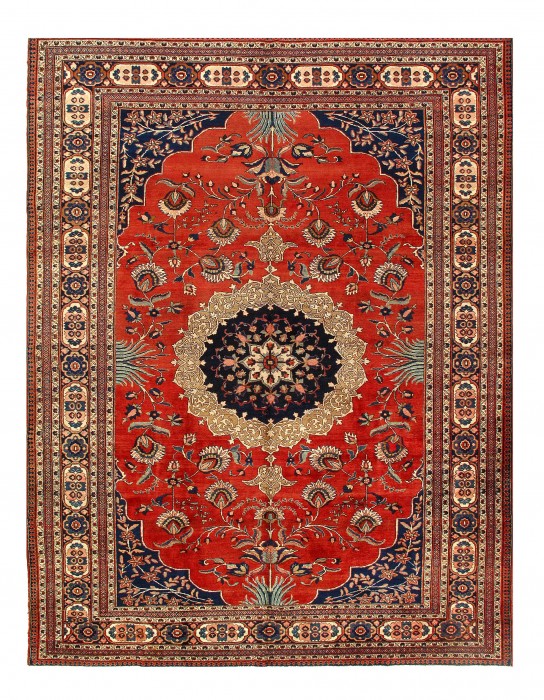 Antique Tabriz rugs are distinguished by their excellent weave and by their remarkable adherence to the classical traditions of antique Persian rug design. But they cannot be distinguished by any particular pattern or by their coloration. The city of Tabriz, in northwest Iran / Persia , was the earliest capital of the Safavid dynasty, and it can claim to have been a center of carpet production longer than any other city in Iran. Consequently, it is not surprising that the carpets woven there have been able to preserve the highest technical standards and the most varied repertoire. Antique Tabriz rugs offer classical medallion designs and a host of allover patterns as well in every color imaginable, from brilliant rich tones to soft pastels. What sets them apart from other Persian rugs is their quality.

Tabriz is the capital of Azerbaijan, a province in the north of Iran. It has survived repeated destruction by numerous earthquakes and invasions by the Mongols, Tamerlane, Ottomans and Afghans, as well as two Russian occupations. During the late 19th century three Persian master-weavers, Haji Jalili, Sheik Safi and Kurban Dai contributed to Tabriz’s revival and Tabriz rug merchants began exporting Persian antique rugs to Western markets on a large scale. There is no traditional color scheme and the variety of color is limitless, ranging from rich jewel tones to subtle pastels. Tabriz rugs are precisely drawn and executed with care making them extremely popular among designers.

Traditionally, Tabriz has been a city of master weavers. The ateliers in this influential carpet-weaving city established a strong reputation for classicism and quality that is still respected today. Regional carpets feature effortless curve-linear designs, Safavid emblems, allover Herati (fish) patterns, spectacular medallions and masterful motifs of all shapes and sizes.