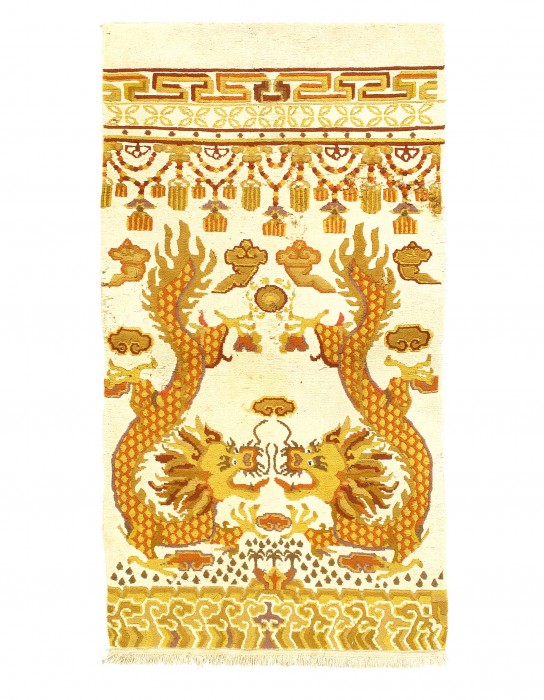 The dragon is an important astrological symbol in the eastern zodiac and is considered the most powerful. This mystical creature celebrated in legends is the only mythical animal featured in the Eastern zodiac. Dragons are powerful, benevolent creatures that guard the Tree of Life, protect the pearls of wisdom and harness the power of all earthly and celestial elements. They are also harbingers of good fortune, which makes the Year of the Dragon particularly auspicious.

Symbolic dragons are featured throughout carpets produced in Tibet, Mongolia, the Far East and the Caucasus. When featured in carpets, dragons are typically depicted as chimeras incorporating traits from many animals that inhabit the land, sea and air. Dragons also represent absolute authority and are often associated with the emperor and imperial authorities. However, they are also deeply symbolic animals that bring health, wealth, happiness and knowledge to common people.

When depicted alongside scrolling ruyi clouds, dragons represent celestial guardians. They are also seen holding the flaming pearls of happiness under their chins or protecting the pearls of wisdom in their claws. The benevolent dragon is depicted in many different ways in China and the Caucasus, yet the mystical creature universally represents positive forces and good fortune. The elusive dragon and protector of the Earth’s many secrets may be hard to find in the natural world, but its symbolic form is highly visible in the antique carpets produced in contiguous countries and faraway regions.


All of the different meanings are well represented in Chinese dragon rugs, which Pasargad Collection of Antique Rugs has a number of. Most rugs have a single large image of a dragon that takes the center stage, but some also have two or more of the creatures, usually facing each other in a playful mood. The designs are often very ornate and eye-catching, which makes the rugs all the more attractive. Chinese dragon carpets are highly valued not only for their aesthetic appeal, but also for their symbolism.